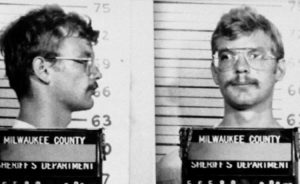 What confounded the minds of thousands throughout the nation, was how a human being could resort to such sinister and callous activities. Two psychological theories, drawing upon some of Dahmer’s childhood experiences provide some insight regarding why and how Dahmer was able to kill so many people without any guilty conscience. The theories are not intended to justify Dahmer’s actions, but rather pinpoint the factors that eventually contributed to the formation of a murderer.

Analysis of the Jeffrey Dahmer Case

Up until the age of six, Dahmer was reported to be a happy child who did not display any signs of mental disturbance. However, after having a correctional surgery for a double hernia, Dahmer became increasingly withdrawn, anxious, and insecure. During this unstable period in his life, he also was forced to move to Ohio with his father due to a career opportunity his father had accepted there. His withdrawn nature caused him to be unable to make any bonds in society and remained aloof. He started to experience the desire to engage in homicide and necrophilia when he was in his early teen years, but ultimately it was the rancorous separation and divorce of his parents that was the final stressor, acting as a catalyst for Dahmer to actually act upon his perverted desires.

His first victim was Steven Hicks, a hitchhiker whom Dahmer picked up, brought home, and gave alcohol to. When Hicks started to leave, Dahmer struck him on the head with a barbel. He then proceeded to dismember Hicks’ body and bury the parts in a wooded area beyond his backyard. Dahmer did not kill again for many years. This is what differentiates a serial killer from other types of multiple murderers such as spree killers and mass murderers. Serial killers always take a break, or a “cooling off period”, before they murder another victim. It took Dahmer another nine years to again act upon his murderous instincts. During this interim period, Dahmer joined the army but due to a severe alcohol addiction he was discharged.

After his discharge Dahmer returned to Ohio, and after several bouts with the law including arrests for disorderly conduct and masturbating in front of two juveniles, he decided to kill once again. He picked up a man by the name of Steven Tuomi at a gay bar, drove him to a hotel, and once again, gave excessive amounts of alcohol to him. He died the next day, though what exactly happened to him cannot be determined, as no remains of his body have ever been found. From that point on, he continued to murder for thirteen years. His pattern was to lure African American boys and men by promising to give them sex or drugs, and he would then give them a voluminous amount of alcohol laced with sedatives. With the victims significantly incapacitated, Dahmer would strangle them to death. He would then perform sexual acts on the dead bodies and eventually dismember them, though he often kept either the skulls or the genitalia of the victims as trophies.

In 1989, there was a close call with one of his victims, and Dahmer was arrested for child molestation of the thirteen year old victim. He pleaded guilty, claiming that the victim looked much older than he was, and he was allowed to stay with his grandmother while awaiting sentencing. Even in such a precarious position, Dahmer could not refrain from killing, dismembering and having sex with the body of another African American man, Anthony Sears, who was striving to be a model. He made eloquent statements at his sentencing for the child molestation case, claiming he had learned from his mistake and rehabilitation would be more effective for him than a prolonged incarceration sentence. The judge agreed to give him a short sentence of only one year in prison and five years of probation. Dahmer did not receive any psychological evaluation or treatment in prison, and was released only after serving ten months of time. He then continued murdering multiple African American men. As a strategy, he selected victims who were on the periphery of society, most of whom dabbled in some form of criminal activity. This made the victims’ disappearances less conspicuous and more attributable to their own engagement in crime, usually drug crimes.

Finally, in 1991 after several more murders, Jeffrey Dahmer was caught. One of his victims had managed to escape into the street while wearing handcuffs, and told the police that someone had drugged him and had tried to make him a captive. The police were willing to investigate, and the victim led them to Dahmer’s house where they found photographs of dismembered bodies and the dismembered body parts of several victims preserved within his refrigerator. Dahmer was arrested and charged with fifteen counts of murder, to which Dahmer pled guilty by reason of insanity. However, the jury was not convinced that he was insane and felt that he had fully understood the repercussions of his actions. He was thereafter sentenced to a total 957 years in prison, but was killed in 1994 by another inmate who was angered by Dahmer’s lack of remorse and the sick sense of humor Dahmer had displayed regarding the killings within prison.

Dahmer’s only explanation for the crime was that he was insane; in fact he had entered the guilty by reason of insanity plea against the wishes of his legal counsel, because he felt it to be true. Yet, since there is no evidence to support this claim, it cannot be proffered as a legitimate explanation for his actions. In fact, the forensic psychologists who had evaluated him contended he was not insane; he simply suffered from other several mental health disorders. They postulated that he committed the crimes due to his previously undiagnosed and untreated borderline personality disorder, schizotypal personality disorder, and a psychotic disorder. The combination of these disorders resulted in highly deviant behaviors and thought processes that led him to the killings.

The hypothesis of the psychologists in this case provides the foundation for the first psychological theory relevant to the case: the theory of mental illness. This theory proposes that there is a direct relationship between mental illness and violence. Borderline personality disorder, the first mental illness Dahmer was diagnosed with before trial, is a disorder characterized by unstable moods, behavior, and relationships. Those who have borderline personality disorder have unusually thin emotional skin, and thus they internalize pain from otherwise fairly innocuous interactions, often because they associate everything with childhood trauma. This pain is then transferred to others by verbal humiliation, threats of physical harm, and the infliction of actual physical harm upon oneself or others. One assumption, therefore, is that Dahmer inflicted pain upon others due to the pain he received in childhood from the hernia operation, which he may have felt was a sexual violation, and the bitter fights his parents had before their impending divorce. Schizotypal personality disorder, on the other hand, describes a personality type that is largely withdrawn, has difficulty in experiencing pleasure from standard sources of happiness, and is stunted in the area of emotional expression. Perhaps Dahmer inability to extract a thrill from conventional sources, caused him to pursue the thrill of killing and performing sexual acts upon corpses. Furthermore, his inability to express his emotions verbally and his lack of intimate friends may have resulted in the expression of emotion through violence. Finally, psychosis is particularly dangerous because hallucinations are one of its primary primary symptoms. Dahmer may have been induced to commit his horrifying acts by imagined external subjects, but ultimately he decided to do them, despite knowing how wrong it is.

Another psychological theory is the psychosocial theory, formulated by Erik Erikson, which is a theory focused on psychological development in each stage of an individual’s life. Dahmer did not exhibit any abnormal behaviors until the age of six. This period of life, according to the psychosocial theory, is infused with the psychological battle between industry vs. inferiority and spans from ages 5-12. At this stage, if presented with too many life challenges at once, a child develops an inferiority complex which can cause withdrawal from social bonds. At this stage Dahmer faced his surgery, the birth of his brother (which took attention away from himself), changing schools, and dealing with the volatility of his parents. All of these factors collectively may have caused him to feel inferior, isolate himself from society, and in the absence of societal regulation, contemplate deviant criminal acts to feel a sense of control over others.

The conclusion of all elements discussed herein, is that childhood stressors affect everyone differently, and in cases like Dahmer’s these stressors become the root of psychological disorders correlated with crime. Trauma in childhood may be the root reason accounting for unstable moods and lack of emotional regulation inherent to borderline personality disorder, and the feeling of neglect in the face of significant life events may cause feelings of inferiority and social withdrawal, thus severing one’s ties to societal values and morals. If Dahmer experienced the hallucination aspect of psychosis, he may have surrendered to the perceived external influencers because he did not feel he had another other friends or contacts to guide him to refrain from behaviors that harm humanity. Although it is not known what combination of these factors resulted in Dahmer’s serial murders, at least some of these elements together probably propelled his inner fantasies into actual events.