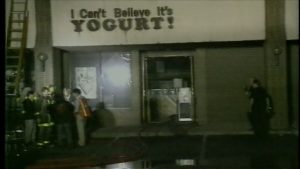 Friday, December 6, 1991. James and Maria Thomas visited an “I Can’t Believe It’s Yogurt” shop on West Anderson Lane in Austin, Texas between 9:45 and 10:00 PM to check on their 17-year-old daughter Eliza Thomas. They did not stay for very long, but noticed that 3 other young girls – Amy Ayers (13) and sisters Jennifer and Sarah Harbison (17 and 15 respectively) – were in the shop at that time as well.

Jennifer, who worked at the yogurt shop with Eliza that night, made plans with Sarah to have Amy over at their house for a sleepover later that night.

The store was scheduled to close at 11:00 PM, but patrolling rookie policeman Troy Gay reported to his dispatcher that the shop was on fire at 11:47 PM. According to a confirmed timeline later presented by prosecutors, the first Austin Fire Department fire truck responded to the two-alarm blaze nearly six minutes later at 11:53 PM.

According to News 8 Austin, the key was still placed inside of the store’s front door lock. Therefore, the firefighters had no choice but to break down the door to access the building. They were unable to see very much of anything due to the vast amount of smoke that filled the entire shop. Sadly, the horrifying nightmare of that evening was not discovered until the smoke cleared.

The naked body of 13-year-old Amy Ayers was the first discovered, lying face-down on her side in the middle of the shop with an empty cash drawer nearby. It was later confirmed that she died from strangulation and a gunshot wound from a .22 caliber firearm to her head.

A gagged 15-year-old Sarah Harbison was discovered in the back room of the shop. Her hands were tied behind her and investigators confirmed she was sexually assaulted. 17-year-old Eliza Thomas was found on top of Sarah in a similar style, but had not been sexually assaulted. Both teenagers were extensively burned. Sarah’s body could only be identified by her dental records due to her face and body being burned beyond recognition.

The body of Sarah’s 17-year-old sister Jennifer was initially placed on top of the other 2 girls but was apparently moved by the flames after the shop was set on fire. Based on the condition of the crime scene, prosecutors later concluded that each of the young girls had been undressed, gagged and shot execution-style. Three of the four naked bodies were stacked on top of one another and then the shop was set on fire in an alleged attempt to cover the tracks of the people responsible.

Now-retired Sergeant John Jones to the Austin Chronicle, “I’ve seen burned bodies before, but the enormity of that, to have the stacked bodies and…we couldn’t tell a lot then – race or sex.”

After his arrest, Springsteen confessed to sexually assaulting Amy Ayers after she was shot in the head. However, according to My San Antonio, the police confirmed that the sample obtained from Ayers’ vaginal swab did not match Robert’s DNA. Robert was convicted of capital murder and sentenced to death in 2001. His sentence was later reduced to life in prison. Michael Scott was also convicted and received the same sentence of life in prison.

It was alleged that 23-year-old Forrest Wellborn (who was 15 at the time of the tragic murder) was the getaway man who stayed outside of the shop in the vehicle. Prosecutors dubbed Maurice Pierce as the “mastermind” behind the crime, per the Austin Chronicle. He spent over three years in jail before his charges were dismissed in 2003. Neither he nor Forrest were formally tried or convicted due to a lack of evidence.

Five years later, in 2006, the Texas Court of Criminal Appeals ruled that Springsteen and Scott were unfairly denied the opportunity to cross-examine each other thereby violating their basic constitutional right of due process. As a result, their convictions were overturned.

The two-alarm shop fire made it very difficult for investigators to find substantial physical evidence to connect to any of the four suspects. Prosecutor Robert Smith told the jury that the “crime scene was a total mess… standing in water by the time the police arrived.”

The Austin Chronicle reported in 2011 that attorneys for two of the four suspects along with retired Sergeant John Jones (one of the original Austin Police Department investigators) referred to the investigation that led to the arrests as being “hopelessly flawed.” They agreed the crime could still be solved even though it would be very difficult due to the amount of time that has passed since the tragic incident.

They agreed that it would essentially require the commitment to essentially start from scratch – reexamining the evidence in crime scene photos, the evidence that was never tested for DNA and the “roughly 130,000 pages of investigative documents.”

Criminal attorney Amber Farrelly, who worked with Scott’s and Springsteen’s defense teams as a law school student, stated the need to start at the very beginning with the original materials to solve the case. By doing so, she explained that a person could do their own work with the “original equation” to reach their own conclusion and identify the errors that were made. She stated that, “If someone were to come in with an open mind with no ties to the previous cold case… and to look at the original investigation…I think they would come up with a different theory and…would be on the right path.”

Austin Police Department Detective Jay Swann told the New York Post that he still believes Scott and Springsteen were involved and that both men provided details about the crime that were not made available to the public. Swann also stated that the APD spent an “incalculable” amount of time on the case over the years but confirmed that the cold case is still “at the forefront” of their cases.

Anyone with any information is asked to contact the Austin Police Department.