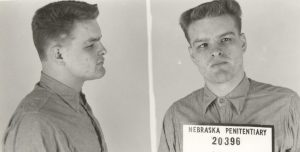 Charles Starkweather (also known as Charlie) was born in Lincoln on November 24th, 1938, into a poor, uneducated, but decent family. His childhood was not filled with the beatings and abuses that so many depraved killers recollect when they are finally captured. As a matter of fact, Charlie’s dad was a carpenter; his mom a waitress, and between them they made sure the family never went without food and shelter. Indeed, his memories of his upbringing were pleasant.

But not his memories of school. It is here where Charles Starkweather began to be molded into an individual capable of horrific acts. He was bowlegged with a speech impediment; coupled with his poor eyesight that wasn’t correctly diagnosed as myopia until he was fifteen, he made a perfect target for the bullying of classmates. They constantly made fun of him, and being a slow learner with little if any motivation didn’t help his cause. He constantly sparred with the other boys in school, always using their derision of him as his reason for fighting. One of his few close friends, Bob Von Busch, remembered Starkweather as being kind and fun to be around, but with an incredible cruel streak running through his core.

James Dean, although already dead for two years, was at the height of his popularity and Starkweather became enthralled with the actor’s persona, copying the way he dressed, his hairstyle and his mannerisms. But he was no James Dean, and at sixteen he dropped out of high school to take a job as a warehouse worker. His friendship with Von Busch remained strong, and he began to date the younger sister of his pal’s wife, Caril Ann Fugate. He had a falling out with his own father over Caril’s minor accident while driving Charlie’s hotrod, which his dad partly owned. He was thrown out of the house and wound up living in the same rooming house as the Von Busch couple. He quit the warehouse job to become a garbage collector, and soon realized his $42 dollar a week job was not going to support himself, never mind a life with Caril Fugate.

Charles Starkweather was not well liked by Caril’s family. He had told everyone that he was going to marry the girl, who was not even fifteen yet. Worse yet, he told people that she was pregnant with his child, even though she was not. Desperate for money to be able to move up in the social order, but lacking the brains to achieve that goal realistically, he made a decision. He would steal it. On December 1st, 1957, nineteen year old Charlie walked into a gas station in the middle of the night in Lincoln and robbed the place of one hundred dollars. He drove the attendant, Robert Colvin, out to the edge of town, where he murdered him with a pair of shotgun blasts. He told Caril what he had done the next day, but her fascination with Charles Starkweather, plus her own unhappiness with her situation at home, kept her devoted to him.

The money soon ran out and Starkweather was back where he began, in a dead end life. On January 21st, 1958, Charlie drove his car to the Fugate home. He had his .22 rifle with him. His later recollections of the events that followed are unclear. Exactly not known is if Caril was home or came home later, but when Starkweather was done the results were perfectly clear. He argued with the family and then shot and stabbed them to death, including Caril’s toddler sister, whom he killed by jamming the barrel of his rifle down her throat. Caril Ann Fugate, who either was present as it happened or came in shortly after, then spent the night with Starkweather eating potato chips, drinking soda and watching television with him!

Relatives and friends began to become concerned about Caril’s family when they were not seen or heard from. Whenever anyone would come to the house, Caril would convince them to go away; telling them her family had the flu. This ploy worked for a while, and the pair stayed there with the corpses of the Fugates hidden in various locations around the property. Finally, Bob Von Busch, unable to convince the authorities something was not right with his in-law’s family, went to the house and discovered the bodies. Starkweather was an immediate suspect; his dislike for the Fugates was well documented. By then, Starkweather and Caril had fled in his car.

Twenty miles outside of Lincoln lived a friend of Charlie’s family, August Meyer. They pair drove to this fellow’s house, and even though he had known and been kind to Charlie all his life, Starkweather killed him with his rifle, stole his money and weapons, and then ate his food. They stayed the night and left in the morning, but after repeatedly getting his car stuck in the muddy roads, Starkweather decided to abandon the vehicle. Grabbing the guns and money they had killed for, they hitched a ride with a teenage couple. Robert Jensen and Carol King, neither one eighteen years old, would never get the chance to be. Both were shot and stabbed repeatedly. Starkweather would later claim that Caril had killed the girl, but she would deny it. What couldn’t be denied was that the whole country was horrified with the killing spree this pair of misfits was on.

It was not over yet, not by any means. Starkweather disposed of the teens’ bodies back at August Meyer’s farm, took their car and incredulously decided to go back to where he was being hunted, in Lincoln. By now the bodies of Meyer and the unfortunate teenagers had been found and a major manhunt was under way. But his garbage route had given Charlie a good knowledge of the well heeled parts of Lincoln. He went to the home of a wealthy industrialist, and close friend of the governor, a man named C. Lauer Ward. Finding only his wife and their maid home, he forced them to make him breakfast at gunpoint, while Caril Fugate slept in the library. Eventually he stabbed Lauer’s wife, Clara, to death in the upstairs bedroom. Unfazed, he waited for the evening paper to arrive so he could read of his exploits, which by now dominated the headlines. That evening, when C. Lauer Ward arrived home, he was met at the door by Charlie, who shot him to death. The maid, Lillian Fencl, was tied to a bed and stabbed to death. Later Charlie would say Caril killed her, while Caril, not surprisingly, blamed Charlie. The maid’s death was the only one where Charles Starkweather did not claim self-defense!

When the bodies at the Ward home were discovered, the governor called out the National Guard to help in the manhunt. Now driving the Ward’s vehicle, Starkweather and Caril Fugate made their way back to Caril’s parent’s home. There was still police activity there and the dimwitted duo finally realized they would need to leave the state. They decided to go to Washington, but also figured out that they needed another car. Charlie Starkweather’s last victim was a harmless traveling shoe salesman named Merle Collison. He was pulled over on the side of the road sleeping when Charlie woke him up and told him they were going to swap cars. When Collison balked at the notion, he was shot several times.

Caril and Charlie, with Collison still in the front seat dead, hopped in, but Charlie couldn’t release the emergency brake. A geologist driving by stopped to help what he viewed as a young couple in trouble. Charlie brandished the rifle and told him to aid him with the brake problem. The Good Samaritan saw the dead man in the front seat and decided to grab at the weapon. As he struggled with the murderer, a Wyoming deputy named Bill Romer happened by. Caril leapt from the car and ran to him, screaming that she was a hostage. Starkweather by this time had stopped fighting over his rifle and had gone back to the stolen Ward’s car. He took off but was taken into custody after a high speed chase that saw his rear window shot out and glass shattered all over his head and neck. It was January 29th. The reign of terror had lasted eight days.

The pair now in custody, the nation breathed a sigh of relief. At first, Charles Starkweather told the police to go easy on Caril, but when he learned that she was blaming him and claiming she was a hostage the whole time, he became enraged. He maintained she could have escaped any number of times and that she had killed some of the victims herself. They were tried separately. Charles Starkweather had let himself be extradited back to Nebraska, seeing no difference in the electric chair there or Wyoming’s gas chamber. In a life full of mistakes and bad decisions, this one was his most ironic. The Wyoming governor was a staunch opponent of the death penalty; Charlie would likely have gotten a life sentence. Instead he was quickly sentenced to death in Nebraska. Caril Ann Fugate, with a defense based on her hostage story, was also convicted of murder, but her young age got her sentenced to fifty years in a women’s prison. This was later reduced to thirty for good behavior. A model prisoner, she was released in 1976 after serving eighteen years behind bars. She is currently a medical assistant in the state of Michigan. She has never married and refuses to speak of Starkweather.

As for Charlie, he remained bitter and hating the world until the end. Before his execution, he was asked if he would like to donate his eyes to an eye bank, so some good could come of his life. “Hell no!” he crowed. “Nobody ever did anything for me when I was alive. Why should I help anybody when I’m dead?” He went to that death, electrocuted on June 25th, 1959. He is buried in the same cemetery as Caril Fugate’s family and the Wards, five of the eleven innocent people he slaughtered in a binge of killing that frightened the entire land.