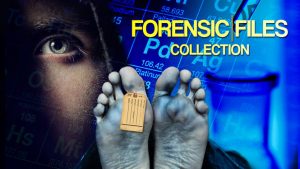 Forensic Files® is a pioneer in the field of fact-based, high-tech, dramatic storytelling. This series of television programs delves into the world of forensic science, profiling intriguing crimes, accidents, and outbreaks of disease from around the world.

True-crime buffs will love the engrossing blend of detail, mystery, and medical investigation. Forensic Files® puts a new spin on the “whodunit” genre.

Currently Forensic Files exists of 15 Seasons (404 Episodes). It aired for the first time in 1996.

You can currently still buy the series on Amazon on DVD (as of June 26, 2009, Amazon.com says the DVD has been discontinued by the manufacturer.). You can also watch all Episodes on Amazon Prime. Several episodes are also available on distributor FilmRise’s YouTube channel.