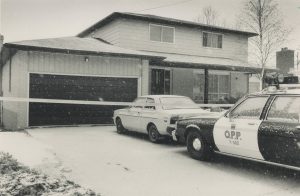 The Story of Krista Sepp

Midland is a small Ontario town located on the shores of Georgian Bay. It has a population of almost 17,000 people and quite frankly, not much goes on in this sleepy little town. Midland was incorporated in 1890 and you can count on your hand the number of murders that have occurred there, but on the night of February 3, 1989 a murder occurred that would put this small Ontario town in the news.

During my career as a police officer patrolling the streets of Midland, this case was one that I can honestly say shouldn’t have happened. The twenty-one year old victim in this case was Krista Sepp who was employed by Child and Family Services as a social worker. Krista was working her first night shift at a group home and one of the residents of the home was Joyanne Beeson.

Beeson was a sixteen year old troubled youth that was sent to the group home for trying to stab her mother and step-father in a small town north of Midland. One of the greatest tragedies of this story is neither Krista nor the police had any idea why Beeson was a resident of the house. Had this piece of information been made available Krista Sepp may very well still be alive today.

During her stay at the group home Beeson began a relationship with an eighteen year old male from town named James Tobin. Tobin was known to police as a kid who was known to prowl the streets looking for things to steal or places to break into. The staff at the group home was aware of Tobin’s feelings for Beeson and they did their best to stop the two of them from getting together. Even though it was never confirmed there was a strong belief that Beeson would slip out of the house at various times and meet up with Tobin.

On the night of the murder Tobin attended outside the group home and met up with Beeson. Beeson decided she had had enough of life at the group home and wanted Tobin to do something about it. Beeson talked about wanting to be a modern day version of “Bonnie and Clyde” living a life of crime. Tobin and Beeson entered the group home and Tobin ripped the phone out of the wall so Krista could not call the authorities. The pair met Krista in the upstairs hallway and Tobin produced a knife.  As Krista was begging for her life Tobin stabbed her nineteen times killing her instantly.

Tobin and Beeson took off from the group home and stole a car to facilitate their getaway. The couple headed north and were subsequently arrested a short time later. Tobin was convicted of second degree murder and was eligible for parole after twelve years. Beeson was convicted of manslaughter and sentenced to six years.  She was released in 1995.

Krista’s murder was the second tragedy the Sepp family had to deal with as her brother, who was a recovering drug addict, was stabbed to death in 1983 in Sault Ste Marie, Ontario. Two former drug acquaintances were convicted in his murder.

At the time Krista’s murder, she was the first social worker to be killed in the line of duty. There have been numerous changes to the way Child and Family Services staff group homes now and client information is much more available to the staff members involved. This is a direct result of the unfortunate and needless murder of Krista Sepp.