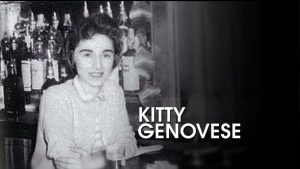 In the pre-dawn hours of March 13, 1964, Mary Ann Zielonko was awakened by a knock at the door. Maybe she noticed that Kitty hadn’t come home the night before. Maybe, as Mary Ann approached the door, her chest swelled with anxiety, that premonition some claim to get before receiving bad news. It was shortly after 4 AM on the couple’s first anniversary when Mary Ann opened the door to the police, who told her Catherine Genovese was dead. Around 6 AM, Kitty’s family was delivered the same news in Connecticut. “We were all half asleep, and all of a sudden a bomb exploded,” her brother, Vincent said. Maybe, that’s how Mary Ann had felt too—like a bomb had exploded, decimating the life she had built. In New Canaan, Kitty’s mother had to be sedated, and her father could not bring himself to identify the body. The burden fell on Mary Ann.

The coroner counted 13 stab wounds. There were an impressive number of defensive wounds, too, indicating she had fought hard. She had a chance. She might have lived, even, if the police had been called earlier. Another detail the media forgot: maybe the police were called earlier. One witness, a teenager at the time, claimed his father called the police during the first attack. No one followed up on the call, and no one came. That mythical call, untraceable, unverifiable, points towards a less known, more disturbing conclusion—maybe residents were right to distrust the police.

In any case, Karl Ross was right to be fearful of the police as a gay man. After being woken up at dawn to hear the news, after identifying her girlfriend’s body in the morgue, Mary Ann Zielonko became a prime suspect in the murder investigation. Kitty and Mary Ann were careful about who they disclosed their relationship to—Sophie Farrar, the woman who held Kitty as she lay dying, was one of the only neighbors who knew the full truth, and Vincent Sr. and Rachel Genovese simply knew Mary Ann as Kitty’s good friend, though they suspected there was more to it. But the police discerned the true nature of the girls’ relationship quickly. At the time, homosexuals were thought to be more prone to jealousy than heterosexuals, which only fueled suspicion of Mary Ann. She was interrogated for hours about Kitty and their relationship, their sex life, of which Mary Ann said, “What right did they have to know?”

None of this, however, was printed. In the papers, Mary Ann and Kitty were simply “friends,” “roommates.” Karl Ross was just a cowardly neighbor. And even when Mary Ann took the stand at Winston Moseley’s trial, identifying house keys and a wallet she’d given Kitty for Christmas, the court was not allowed to learn of the girls’ relationship.

Initially, the murder only got four paragraphs in The New York Times. However, two weeks later, on March 27, a different headline screamed across the front page: “37 Who Saw Murder Didn’t Call the Police.” The article written by Martin Gansberg began, “For more than half an hour 38 respectable, law‐abiding cit­izens in Queens watched a killer stalk and stab a woman in three separate attacks in Kew Gardens.” The result was outrage. People all over the country saw the crime as a symbol of all that was wrong with urban life. Residents of cities were apathetic and scarily anonymous, the common refrain went. And at a time when young, single “career girls” were flocking to cities in search of independence, Kitty Genovese’s murder was a way to lure them back to the safety of the suburbs. After all, Winston Moseley clearly targeted women, saying, “I chose women to kill because they were easier and didn’t fight back.”

So, the life and death of Catherine Genovese became a parable. The dangers of the city were sketched in her features. The public knew Kitty by her cropped mugshot—dark, thick brows, a fixed gaze, slightly parted lips—every time the photo was printed, the haunting implication to women everywhere was this could be you. And Winston Moseley, the family man with the wide-set eyes and sharp cheekbones, he too was a warning for the public: he could have been anybody.

Not four years after Kitty’s murder, social psychologists John M. Darley and Bibb Latané started demonstrating their new theory in 1968, something they called the bystander effect. The two became interested in the subject after seeing the coverage of Kitty Genovese’s murder. The theory goes as follows: when in a larger group, people are less likely to help a victim in an emergency. This is because each bystander believes someone else will offer help, a concept that is called diffusion of responsibility. Now, every student who takes a social psychology class will inevitably learn about Kitty’s murder. They will not learn that Kitty had four siblings, or that she was a lesbian, or that she was elected “Class Cut-Up” in high school, because these details are not provocative. Instead, they will learn about Winston Moseley, who stalked and stabbed a woman over half an hour on a March night. They will learn about Robert Mozer, who scared Moseley off and then went to bed. They will learn about Karl Ross, who climbed across his roof to reach his neighbor, and they will learn that he did not intervene.

This is what they will not learn: there were two attacks, not three as the Times claimed. 37 people likely did not see and hear both attacks. The first attack probably only lasted a few minutes, and by the time most neighbors reached their windows, all they saw was a lone woman disappearing around the corner. And the second attack, the fatal one, occurred in the vestibule, where only one man could see it. Many witnesses claimed they misinterpreted Kitty’s screams as a lovers’ quarrel, or someone exiting the neighborhood’s pub. And some neighbors may have even tried to call the police.

This is what they will not learn: after her death, Kitty’s brother William felt a need to join the Marines. He was shipped off to Vietnam, where he lost both his legs. Mary Ann Zielonko still recalls how she and Kitty would take Sundays and Mondays off to spend together, and how much she loved Kitty’s smile. Mary Ann was an aspiring artist, and had begun painting a portrait of Kitty shortly before her death. It was years before she could bring herself back to it. Rachel Genovese’s children tried their hardest to shelter her from the media coverage of the case. But when she died in 1993, they found a collection of newspaper clippings surrounding the case hidden in her desk.

This is what they will not learn: Catherine Susan Genovese was buried in in Lakeview Cemetery in New Canaan, Connecticut on March 16, 1964. In school, she liked her English and music classes best. And, when she finally had enough money saved, Kitty dreamed of running her own Italian restaurant.