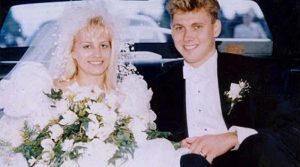 Born August 27, 1964 in Toronto, Ontario, Paul Kenneth Bernardo will go down as one of the most notorious rapists and serial killers in Canadian history. Bernardo was the result of an affair his mother had that was kept a secret until he was 16 years of age. Kenneth Bernardo, who Paul had thought was his biological father, was convicted of child molestation in 1975 and was rumoured to be the “peeping​ tom”​of the neighbourhood. And even though he was never charged with any offences, rumours circulated that Kenneth was sexually abusing Paul’s younger sister.

By all reports Paul’s life of crime began with his first sexual assault on May 4, 1987. Bernardo was responsible for 11 sexual assaults over a period of the next three years in the Toronto area. Bernardo moved to St Catherines, Ontario on February 1, 1991 only to sexually assault his twelfth victim on April 6, 1991. Some reports suggest there may be as many as nineteen reported victims in total and an unknown number of assaults that were never reported to law enforcement.

On December 23, 1990 Bernardo would commit his first murder with the assistance of his then girlfriend, Karla Homolka. The victim would be the fifteen year old sister of Karla, Tammy. The pair drugged Tammy and took turns sexually assaulting her all the while videotaping the series of events. Whether it was a combination of the alcohol Tammy was given, or the effects of the narcotics used to incapacitate her, she began to vomit and ultimately died. The couple did call 9-1-1 but not before dressing Tammy and moving her to a bedroom in the basement. The official cause of death was listed as accidental – choking on her vomit after the consumption of alcohol.

During the course of the next few months Bernardo seemed to take a step back from his sadistic and bizarre sexual behavior but that all changed for the worse on June 15, 1991. While cruising the area looking to steal licence plates he came across fourteen year old Leslie Mahaffy. Bernardo used the offer of a cigarette to get Mahaffy close to his vehicle at which point he overpowered the young girl and forced her into his car. Bernardo returned home and for the next twenty-four hours he and Homolka took turns sexually assaulting Mahaffy all the while videotaping their sick sexual fantasies. The following day Mahaffy died but the cause of death was never confirmed. There are suggestions she died of a drug overdose and there are also suggestions she was strangled. After the murder, Bernardo used his grandfather’s circular saw to cut up Mahaffy and encase her body parts in cement. The cement blocks were then transported to a nearby lake where they were dumped in the water. One piece of the cement weighed over two hundred pounds and Bernardo was unable to get the piece very far from shore. This piece of evidence would ultimately lead the police to the remaining pieces of cement and allow them to positively identify Mahaffy.

Two weeks after the murder of Leslie Mahaffy, Bernardo and Karla Homolka were married in a lavish ceremony and followed by a honeymoon in Hawaii. When Bernardo was arrested a newspaper article was found in his possession describing a sexual assault that occurred during the time he was in Hawaii. He was never charged in this case but it still remains an open investigation.

Bernardo’s next murder occurred on April 16, 1992 with the abduction occurring in a church parking lot in broad daylight. The unfortunate victim was fifteen year old Kristen French. Over the next three days French was forced to watch the sexual torture and murder of Leslie Mahaffy while being fed large amounts of alcohol. French, like Mahaffy, was repeatedly sexually assaulted by both Bernardo and Homolka while having the entire event videotaped. French was eventually strangled by Bernardo and her naked body was dumped by the side of a road.

On February 17, 1993 DNA matched Bernardo to three sexual assaults that had occurred years earlier in the Toronto area. Karla Homolka was also arrested in what would turn out to be the most talked about plea bargain in Canadian legal history. She was only sentenced to twelve years for her part in the sexual assaults and murders of Leslie Mahaffy and Kristen French. Most legal experts agree that she was a willing participant in the murder and torture, but key video evidence was not available to the Crown Prosecutor at the time of the deal.

Bernardo will go down in history as one of the most sadistic sexual predators in Canadian history. He has admitted, off the record, to sexually assaulting as many as 30 females during the course of his crime spree. On September 1, 1995 Bernardo was convicted in the murders and aggravated sexual assaults of both Leslie Mahaffy and Kristen French and sentenced to twenty five years. During the course of sentencing Bernardo was also declared a dangerous offender which means he will spend the rest of his life behind bars in a tiny 8 X 10 cell at the Millhaven Institution in Bath Ontario.