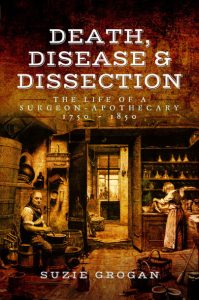 Wind back the clocks a few hundred years and a different picture will begin to emerge. In the place of general practitioners were the affordable-but-overworked surgeon-apothecaries who spent long, arduous hours concocting pills and carrying out gruesome procedures in order to cure their customer’s multitude of illnesses. By contrast, only the most privileged in society could afford a private physician to diagnose them and subsequently refer them to a professional surgeon to offer the same treatment.

The eighteenth and nineteenth-century medical profession was worlds apart from the highly-regulated medical industry we know of today. However, it was not just the profession itself which was different, but cultural attitudes, economy, status and general conditions also played a huge part in shaping the industry into what it was.

Luckily, the author spends considerable time painting a picture of what life during these forgotten years was like for all manner of people involved. She breaks the industry down into manageable sections which even those without any knowledge of medicine, surgery or history will be able to comprehend without issue. While this book would ideally be targeted towards those with a deep interest in the medical or history fields, it is by no means a pre-requisite, largely due to the Grogan’s masterful prose which retains its simplicity while also not dumbing down the facts.

When discussing a topic as complex as the medical field – especially during a time which is vastly different to our own – it can be difficult to portray concise information without straying too much into the world of medical jargon. Likewise, the book includes various passages sourced from eighteenth and nineteenth-century textbooks which, given their time period and subject, may be difficult for readers to comprehend. However, Grogan highlights certain portions of these passages which allow for easier understanding to the layperson.

As mentioned, Grogan takes the time to explain various aspects of non-medical society which influenced the medical profession’s codes and practices. For example, one cannot discuss nineteenth-century surgery without mentioning the phenomenon of body-snatching or grave robbing. When these topics usually rear their heads, the minute details of how these bodies were delivered to medical students and subsequently put to use often takes a backseat to the morbid sensationalism of the act of body-snatching itself. Grogan, however, takes the opposite approach. Body snatching is discussed in detail, but the focus remains on the attitudes towards body-snatching and how the medical profession perceived, encouraged or shunned this sinister phenomenon, nothing else.

While Death, Disease & Dissection appears to be a relatively short book on the surface (141 pages not including bibliography or index), I can think of little else which needs to be added – at least from a layperson’s point of view. As someone with only a passing interest in the medical field and very little interest in history, I found the majority of the book to be easy-but-highly informative reading. The only points which I felt lulled were during chapter 7 which delved into the life of a handful of notable physicians, surgeons, and surgeon-apothecaries. I felt there was some information which could be omitted without losing the overall message but this was by no means a major gripe.

Perhaps due to my own character, the parts which stuck with me the most were the graphic descriptions of some of the surgeries which would be carried out by surgeon-apothecaries during this time period. Given that some practitioners in the medical field still believed in hocus-pocus cures which would be laughed out of the building today, as well the inclusion of some toxic chemicals which practitioners were not aware were hazardous, some of the finer details will curl the toes of many readers. Similarly, the images in the central spine are not to be taken lightly.

The appendix of the book is particularly interesting. As someone not well-versed in medical terminology, the appendix which detailed the most common ailments was a very enjoyable read. Many of the terms appeared familiar (diphtheria, rheumatism, typhus) but I had never researched exactly what they involved. Similarly, the final appendix which discusses the role of women in medicine was a necessary inclusion, particularly in today’s world where there is an intense focus on equality. When first reading through the book I did pick up that there was very little mention of females in the medical field during this time, and was only reached touched upon when discussing male midwives.