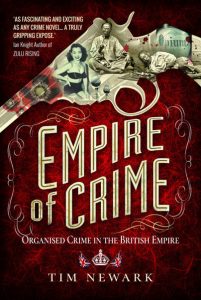 Given the number of books, TV shows and movies which boast organised crime as their central theme, it’s an understatement to say that this topic is a fascinating subject to many people. However, with popularity comes excessive coverage, and organised crime has already been covered in troves.

However, Empire Of Crime claims to be one of the few books which looks in detail at the circumstances surrounding Britain’s refusal to import opium supplies to overseas countries, therefore resulting in a black market approach to buying and selling the medicinal drug. As citizens and governments in Hong Kong and China tried desperately to get their hands on the drug, British criminals seized at the opportunity to become their suppliers, resulting in lucrative business opportunities for both. Empire Of Crime explores these incidents in detail.

On first glance at Empire of Crime’s contents page, one could be forgiven for believing this was a book of short stories all recurring around the general theme of British organised crime, and in a sense, it is. Empire Of Crime gets off to a fantastic start. It paints the picture of the circumstances which were surrounding Great Britain, India and China during the early twentieth century, and explains exactly why the opium trade was such a lucrative endeavor for everyone involved. Even for someone with little knowledge of history, organised crime or the drug trade, everything is laid out in simple-to-understand terms.

While the introduction and first two chapters serve their purpose of hooking the reader in, it then became clear that the book’s narrative was more than a little disjointed. Some chapters end without a fitting conclusion, which I then expected to be continued on the next chapter. However, in many cases, stories are simply abandoned in favour of moving to another story with another host of characters. The book begins to falter around chapter 5. I expect continuity to rear its head, but it never does. While a familiar name might crop up later, the excessive influx of characters and situations do nothing to create a competent, easy-to-follow narrative. Needless to say, it was a little frustrating and eventually, I found myself not really understand exactly what the book’s aim was.

Of course, with such a complex subject matter, it can be argued that Tim Newark is doing the best with the information he has. Empire Of Crime is based around a time period rather than specific characters, meaning it would be difficult to create a perfectly-flowing narrative. For example, if a book were to be written about UK politics in 2016/2017, the book would need to jump between people, incidents and events to make any kind of sense. This is what Tim Newark has done while attempting to adhere to a linear format. It’s surely no easy feat and so for this, Newark should be commended.

Newark’s writing style is an interesting one. Throughout the first few chapters, the book is as factual as any history book, detailing incidents in a straightforward, linear fashion. However, as the book progresses and more characters are introduced, Newark adopts a more storytelling prose in favour of facts, opinion and critique. Given the nature of the book, this prose does indeed an additional element of urgency and realism to the narrative, but detracts a little from the book’s main focus: to relay information as it happened.

Despite this, there is certainly a lot of information covered in the book’s 248 pages (268 including notes and bibliography). The book appears to be marketed as a true crime / thriller hybrid, but I think this is where it falls short. If it had been solely marketed as a true crime history book with a focus on information and facts, I think it would have been much better received. I personally found myself incredibly distracted by the fiction-esque prose; short paragraphs of dialogue (“’But how can we go overseas without money?’ wondered Gangoo”), rhetorical questions (“but who killed them – and why?”), etc. At times I was unsure whether I was reading fiction or non-fiction, which some readers may find refreshing, but I personally struggled to get past it.

Regardless, there were many chapters which were quite engaging. I came away from the book with more knowledge than I had before, and on a truly fascinating subject. The book is by no means bad. Despite the hybrid writing style, it was well-written and got its point across. For a subject which requires such in-depth research and knowledge, Tim Newark has done an admirable job.