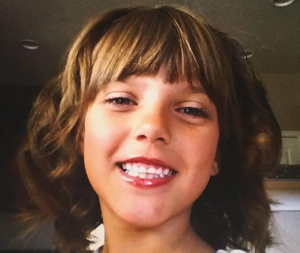 On August 24th, 2016, police in Albuquerque, New Mexico responded to a 911 call about a domestic dispute. When the officers arrived at the address, they discovered the dead body of a ten-year-old girl wrapped in a blanket in the bathroom of her mother’s apartment. The community would soon learn of the years of abuse that led to this young girl’s horrible fate. Victoria Martens would prove the victim of a system that could not act before it was too late.

The Life of Victoria Martens

Victoria Martens spent her entire life in Albuquerque, New Mexico, living with her mother Michelle Martens and attending Petroglyph Elementary School on Albuquerque’s west side. She attended gymnastics class once a week and instructors report that she seemed to be a happy, social little girl.

Unfortunately, the teachers and other adults in her life never realized the nightmare Victoria was experiencing at home. Michelle Martens would later admit to investigators that she used an online dating website, PlentyOfFish, and men who she met at her job at a local Buy Buy Baby, to invite them to have sexual interactions with both her daughter Victoria and her other younger child Matthew.

The state’s Children, Youth, and Families Department (CYFD) reported that five phone calls had been made over the years regarding Victoria’s household. However, the majority of these calls were made by Michelle Martens, consisting of accusations of neglect toward her ex-husband. Both children were interviewed during the investigations into these claims, but no accusations of abuse or neglect were ever substantiated. Daycare workers, investigators, and other adults in her life never noticed any signs that the abuse Victoria experienced was occurring.

In July of 2016, just a month before Victoria’s murder, her mother met Fabian Gonzales online. His arrest record dated back to 2004, including previous charges of child abuse and resisting arrest. Eventually Michelle met Fabian’s cousin Jessica Kelley as well, who was freshly released from prison. Her arrest record sported largely dismissed charges of battery and domestic violence.

Like Michelle had done in the past several times before, she arranged for Fabian Gonzales and Jessica Kelley to have sex with Victoria and her younger sibling. Unlike the previous times, Victoria would not make it out of this encounter alive.

The Murder of Victoria Martens

On August 23rd, the birthday of Victoria, Fabian Gonzales and Jessica Kelley arrived at Michelle Martens’ apartment with the intent of raping Victoria Martens while her mother watched. Investigation revealed that they gave the ten year old alcohol and methamphetamine in order to calm her down. After sexually abusing the girl, Gonzales choked her, and Kelley covered her mouth while she stabbed Victoria in the stomach. Michelle later admitted to the police, that she sat back and watched Gonzales and Kelley rape and murder her daughter, even though the girl begged for mercy and did nothing to stop it.

Neighbors reported seeing Jessica Kelley carrying Victoria into the apartment at 10 p.m. that evening. A question from Kelley to Martens was overheard: “Are you ready?” They reported hearing screams several hours later.

Right before dawn, Michelle and Fabian emerged from the apartment to tell neighbors that Kelley had struck them with an iron. Neighbors asked where the daughter was, and called the police after discovering that she was still back in the apartment.

The unholy scene the police walked in on shook even the veteran officers to the core. Gonzales and Kelley had dismembered Victoria’s body, wrapped her in a blanket, and set her on fire, leaving her remains in the bathtub. The officer saw smoke rising up from under the bathroom door and burst into the room to quickly put out the flames, finding the devastating scene as they did. By that time, it was too late. Victoria Martens was pronounced dead at the scene. After inspecting the scene they found her arms, a portion of sternum, heart, and left lobe of liver wrapped in a plastic bag in a laundry basket.

Michelle Martens later confessed to the police, that she set up meetings with multiple men to have sex with her son and daughter for her pleasure. She arranged the meetings between the men and her children because she was “curious.” Eventually this curiosity morphed into pleasure and, as Michelle told police, she enjoyed being a witness to the rapes.

The Chief of Police at the Albuquerque Police Department would go on to describe Victoria Martens’ murder as “the most gruesome act of evil I have ever seen in my career.” Michelle Martens, Fabian Gonzalez, and his cousin Jessica Kelly were all immediately arrested at the scene of the horrific crime and held on a $1 million cash-only bond. All three were charged with first-degree murder, kidnapping, child abuse resulting in great bodily harm, and tampering with evidence. All three have pleaded not guilty of all the crimes surrounding Victoria’s death.

The local Albuquerque Journal questioned how the Albuquerque Police Department and state Children, Youth, and Families Department failed to find any incidents of physical or sexual abuse in the Martens household despite multiple claims and referrals. It was during this time that information regarding previous investigations was released to the public.

It was discovered that there was one referral that Albuquerque Police had not investigated, a report from several months before that a neighbor had witnessed a boyfriend of Michelle Martens’ attempting to kiss Victoria. Police claim that they did investigate, but were unable to find enough evidence to take any sort of action. This information led Victoria’s maternal grandparents to file a wrongful death lawsuit against the City of Albuquerque in August 2017, stating that their failure had directly led to their granddaughter’s murder. They ask for not only compensation for the family, but policy changes as well.

As the information came to light surrounding Victoria’s tragic history of sexual abuse at the will of her mother, the community united in their devastation. A birthday memorial was arranged to honor Victoria, giving her the birthday celebration she was never able to attend. Several months later, the public was invited to her funeral and hundreds attended. Attendees wore purple, her favorite color, and children received purple teddy bears at this memorial service.

Michelle Martens is the first of the three suspects to be tried for Victoria’s gruesome murder. The trial is set for July 29, 2018. Her death, most certainly, could’ve been prevented, just as was the case with baby Zachary.

Downloads: We have a few downloads available related to Victoria Martens. Such as the Autopsy Report. You can access the downloads here. Parkaman Magazine made these available so that we may never forget the horrendous crimes done by these individuals and – especially – the reason why such killers should remain behind bars – or even – deserve the death penalty.