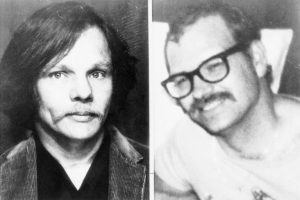 With each attack, Bittaker and Norris were becoming more brazen, and each assault was becoming more brutal. This pattern reached its horrific climax with the abduction of 16-year-old Shirley Ledford on 31st October 1979. The pair spotted her outside a gas station in the Sunland-Tujunga suburb of LA on her way home from a Halloween party. They offered her a ride in the van and she accepted, recognizing Bittaker as a regular at the restaurant where she worked.

Once in the van, they drove to a secluded spot and bound and gagged her at knifepoint. This time, they decided it wasn’t necessary to travel to their usual location, choosing instead to assault Shirley in the back of the van while they drove around town.

Over the next two hours, Shirley Ledford was subjected to the most horrendous and unimaginable torture and abuse. First, Norris took his turn at the wheel while Bittaker set to work tormenting their captive. He slapped and punched her, urging her to scream as loud as she could. Bittaker forced her to perform oral sex on him, as well as raping and sodomizing her, the whole time forcing her to pretend to be enjoying it. With a pair of pliers from the toolbox, he mutilated her genitals, anus and breasts, all the while recording her screams of agony on a tape.

Next, Norris swapped places with Bittaker to continue her torture. He asked her why she wasn’t screaming as loudly for him as she had for Bittaker; then he took a sledgehammer and smashed her elbow. He went on to hit her in the same place a further 25 times while she continued to scream in excruciating pain. At the end, she begged them to kill her to end her suffering.

This time Bittaker forced Norris to commit the final act and, since he “knew it was coming”, he consented. Norris killed Shirley with a wire coat hanger in the same way Bittaker had finished several of the other victims. They decided it would amuse them to see how the press reacted, so they dumped the brutalized and disfigured body of Shirley Ledford onto the lawn in front of a house.

She was discovered the next day by a jogger out for a morning run. The coat hanger had been tightened around her neck to the point where it had cut into the flesh. The diameter was little wider than that of a large coin. Her rectum and genitalia were torn, her left elbow was broken in several places, and she had further wounds to her breasts and hands.

Despite the horrifying nature of the crime, the police initially had little to go on. In the end, it was only the killers’ hubris, as well as Norris’ inability to keep what they had done to himself, that led to their downfall.

After the Ledford killing, Norris confided in an old prison acquaintance, Joe Jackson, divulging the details of their actions. In fear for his own freedom, as well as for the lives of his teenage daughters in whom he thought Bittaker had begun to take an unhealthy interest, he decided to take the story to the police.

At the beginning, with a lack of bodies other than that of Shirley, the police were unable to act, and Jackson was passed from department to department until he came to Paul Bynum at the Hermosa Beach Police.

As it turned out, a month prior to the murder of Shirley Ledford, Bittaker and Norris had attempted three other kidnappings. On 27th September, an unidentified woman managed to escape when approached by the pair. On 30th September, a second woman, Jan Mailin, also escaped, but later that same evening, Robin Robeck was abducted by two men and raped. She escaped before they killed her, but the case had remained unsolved and Robeck had since left the area. But when Jackson mentioned the van, Bynum recalled the case. He tracked Robeck down and she was able to positively identify her assailants from police mugshots.

The police were now onto their trail, but they had to tread carefully; at this stage, they did not have enough evidence for a conviction. They did not want to risk the pair escaping justice, but they needed to act before the killers took another victim.

Norris was placed under surveillance – and within days, he was observed packing marijuana into plastic bags. This was a breach of parole and enough for the police to take him into custody. Norris soon realized he was suspected of far more than drug dealing and knew if he was convicted of the heinous crimes he had committed, he was likely to face the death penalty.

Prosecutor Stephen Kay suggested that his confession came partly out of remorse for what he had done; others might argue he was simply acting to save his own life. In any case, Norris agreed to a plea bargain where he would confess to the murders, would help investigators locate the bodies of the other victims and would testify against Lawrence Bittaker who, he said, had been the instigator from the beginning.

Bittaker was arrested and was eventually brought to trial on 19th January 1981. Evidence against him included possession of photographs of up to 500 girls, including images of Andrea Hall and Jackie Gillian. He admitted to having taken the photographs but denied ever harming any of the girls.

The van was seized and inside were found a sledgehammer, a plastic bag containing lead weights, a book of police radio frequencies, a tub of Vaseline and necklaces from two of the victims.

However, the most damning piece of evidence recovered was the tape recording of Shirley Ledford’s torture. Before the tape was played, those present were told that if they didn’t know what hell was like, they would find out. When the tape was played before the court, people rushed from the room while others covered their ears. Stephen Kay, a veteran prosecutor of many vicious crimes was twice reduced to tears during the trial.

On 17th February 1981, Lawrence Bittaker was found guilty of five counts of murder, five counts of kidnap, nine counts of rape, one count of conspiracy to commit those crimes, two counts of forced oral copulation, one count of sodomy and three counts of being an ex-convict in possession of a concealable weapon. Soon after, he was sentenced to death.

Norris, having pleaded guilty, was sentenced to 45 years to life.

Should they have been prevented?

Having spent most of his adult life in prison, Bittaker underwent many psychological evaluations. Between the ages of 21 and 22 he was diagnosed as “borderline psychotic” and “basically paranoid”, he was described as being manipulative, as having a lot of pent-up hostility and was said to have poor control of impulsive behaviors.

In 1974, when he was 34, he was interviewed by Dr. Ronald Markman following his conviction for attempted murder (he had stabbed a supermarket clerk when challenged for shoplifting). Markman described him as a sociopath who had faked his previous psychotic behaviors and concluded that he would continue to be a danger if released. Bittaker had an IQ of 138, high enough to put him in the top 2% of the population. Intellectually, he was completely aware of what he was doing; emotionally, however, it seems he was entirely unable to empathize with his victims and had no control over his actions.

The warning signs were there for Norris, too. He had twice been convicted for attempted rape. In a third attack, the one that saw him sent to the Atascadero State Hospital, he had clubbed a woman over the head from behind with a stone before proceeding to bash her head against the floor. He was released after five years, having been deemed to represent no further danger to society. Within three months of his release, he had committed the rape for which he was sent to the California Men’s Colony. And yet again, despite his record of reoffending, he served less than five years for this attack before he was released once more.

It is easy with hindsight to say they should never have been released to go on their vicious rampage, but it is sometimes a hard decision to remove somebody’s freedom indefinitely for what they may do in the future. Dr. Markman, however, is in no doubt. He says the evidence was clear and that neither man should have been free to commit these crimes.

During the investigation, Norris led investigators up the fire road to the scene of the murders. They were able to recover the remains of Leah and Jackie. Jackie’s skull still had an ice pick embedded in the ear. Cindy and Andrea were never found.

Of the 500 girls in the photographs found in Bittaker’s room, some were never identified. We may never be completely sure that the five girls Norris confessed to murdering were the Toolbox Killers’ only victims.

Several years after the trial, Officer Bynum committed suicide. In his suicide note, he wrote of how he still had nightmares about the Bittaker and Norris case.

The tape of Shirley Ledford’s torture and murder is now in the possession of the FBI. It is used in training to desensitize new recruits. The recording of the rape of Jackie Gilliam was never found.

Roy Norris is still in prison. His next parole review is set for 2019.

Lawrence Bittaker remains on death row awaiting execution and will probably die in prison before his sentence is carried out. He has never shown any remorse for what he did and replies to mail using the nickname “Pliers” Bittaker. In an interview in 2012, when asked if he regretted what he had done, he replied that of course he regretted it. He was not happy that he got caught.

If you still haven’t read Part 1, you can read it here.